Select around ten pictures from your archive and put them into either “Mirror” or “Window”. Explain why you chose the category.

Fire Crews from Dartmoor Area lining up with the service vehicles.  I did these photos as a favour for my friend who wanted to use this as a morale boosting exercise, to get the crews all together and take pride in their station and vehicles. There was also a photographer from the local newspaper there who marshalled the men into a good position.  Most of them are retained fire fighters in that they are not full time and respond to emergencies when on call on rotation.  The local fire-stations are not manned full time, something I learned while touring round with the Lead Fire Officer.  It seemed quite strange to go into an empty station but there were all the uniforms and helmets hung up ready and waiting for the next shout. Interesting to see behind the scenes. 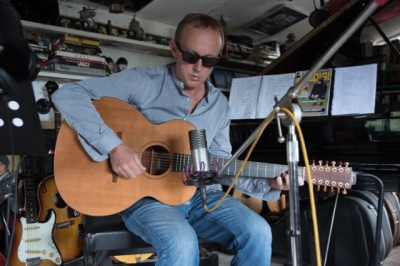 Steve Cradock recording acoustic guitar parts for PP Arnold’s album. I know him so it’s a mirror but also a window on the world of music and recording that I am not directly involved in.  Recording has changed a lot in the last ten years or so, from requiring a big studio and lots of equipment to a MacBook and ProTools plus some microphones.  I have followed Steve over the past six years while he records and plays his music, going on tour with the band and following his career.  This is something I would love to do full time.

Looking to the dam from the bridge on the Okehampton walkway. I am an outdoors person and prefer being out in the country than the city.  I am happiest out in the fresh air and walking, taking in the scenery and the huge vista. 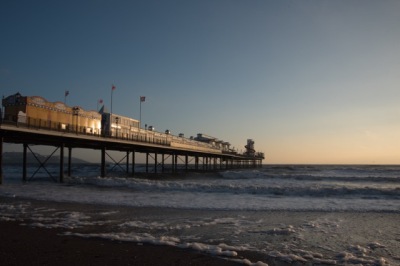 My home town of Paignton. The pier changes depending on the lighting conditions and I have so many different images of it in different weather and light.  This is a late afternoon one, looking towards Torquay and is the pink/blue perfection on a late spring sky, and the golden reflections on the white structure light the darker areas.  It is so much part of Torbay as it is the only one that we have, and is part of the heritage of the seaside culture.  This is the opposite of Number 5 below where I am away from what I know.

The amusement park in Vienna, Austria.  They have kept the 1930s carousel and the 1960s big wheel with the wooden cars along with other old fashioned rides.  This is not a modern park with high tech rides.  It seems reminiscent of a previous time when life was perhaps simpler and we were engaged with less speed and flash.  It also seemed to be very European rather than a British place.  Visiting another city in another country always is a window on other cultures and customs, and I think that each time I go away I bring back a little something from that place.  I am lucky to travel quite a bit and it shapes my attitudes and outlook by getting out of my comfort zone and having to connect with a different way of life. 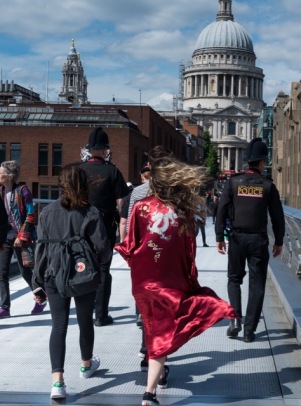 London, Millennium Bridge.  I am from Devon and visiting London tends to come as a bit of a culture shock these days as it is so much bigger and busier.  Wearing a kimono as a fashion item struck me as brave and I was a little envious that I have never had the style to pull that off.

This is very definitely a mirror as this is an image that I made as part of the trials for my final assignment for Context and Narrative.  My theme was on family and the ties that bind us together, and I was trying several different ways of symbolising this using long material ties like those on a maypole.  It could also be seen as a window on my life at the time as I was dealing with an ailing father plus supporting my boys who were changing jobs and life choices.  It is much more the mirror though in this case.

This is Lourdes in France where people come from all over the world to visit the spring where Bernadette apparently saw the Virgin Mary in the 1850s and the basilica where they hold regular ceremonies to bless the sick.  I am not religious at all so to visit this place was an eyeopener.  It gave a glimpse of a whole world that I know exists but am not part of and find it difficult to understand.  I was surprised by the old fashioned carriages and the uniforms of the nuns/nurses as well as by how busy it was even in September.  As a window, this place introduces faith with all the traditional things associated with Catholicism – nuns, priests in long black clothing, gilded crowns on the huge building that stands above everything else and the hundreds of people hoping to find a cure or be blessed.

This is another one where it could be both mirror and window.  I know Steve and this is his band.  They wanted some promo photos so asked me if I would help them out.  It was a window for me to see them as a band and how they interacted with each other in a casual situation rather than recording or on stage.  They were very keen to wear the right clothes and not smile and be quite static.  The life of a band always seems quite glamorous, full of adventure and travel but in fact they are just four guys who get together every so often to play music.

Mushrooms on sale in a street market in Vienna.  It offers a lot of delicious possibilities, although it’s a window because I am a rubbish cook and haven’t seen half of these varieties before, they could be poisonous for all I know!  I like street markets as there are things that you don’t normally see in supermarkets, and all displayed in a way that you want to buy them.  There was also a fishmonger nearby with a beautiful display of fresh fish and shellfish.  Window, yes but possibly mirror because I love food and all the things that this suggests, if only I could find someone to cook it for me.

Going through all my photos trying to pick some out was an interesting exercise as I don’t often trawl through all of them together.  I loved looking at all the images I have taken and the story it told me of what I have been doing over the past twelve months or so, and thinking about what it says about the things that I like to photograph.  Travel has been a big part of my year whether it is fairly local in the UK, from frequent visits to London to a day trip to Bristol, or more far flung as I made my first trip to the other side of the world to visit my sister in Australia.  Everything you see and do informs your outlook on life and each time I go somewhere different I snap things that catch my eye, that can remind me where I have been and open a door on a different place, time, culture.  This exercise has been better than I anticipated and I am glad that I finally got around to doing it as I had lost faith in the course and myself.  I now feel more positive about going forward with the rest of it and cracking on with the assignment.

welcome to expressing your vision

Finding a Place of My Own (Identity and Place)